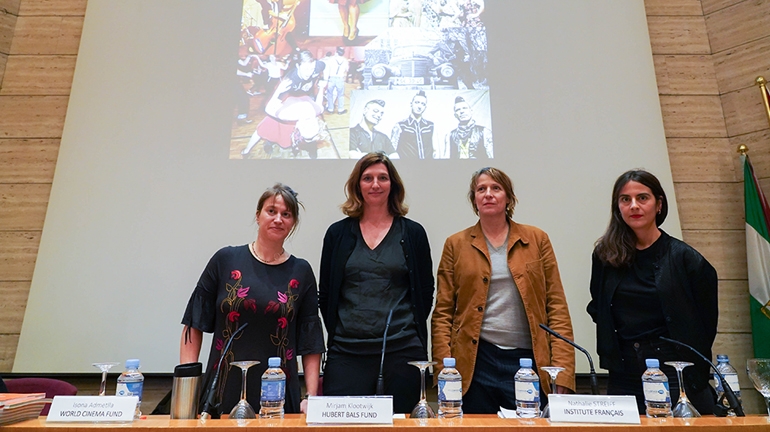 The Malaga Film Festival will announce a call for applications, open to all projects that comply with the requirements described below:

I. The projects must be presented by production companies of Spain, Portugal and Latin America, registered as such with the Institute of Cinematography or similar body in the country of origin, whether trade entities or others recognized as such.

II. The contractual relationship with the scriptwriter confirming the assignment of the  rights of exploitation must be clear.

III. The nationality of the projects must coincide with their country of origin.

IV. In the case of an international coproduction project, the contract or memo deal that substantiating each country’s participation share must be submitted.

V. It is preferable that the project presented be the director’s/producer’s first or second audiovisual work.

VI. Fiction feature films, feature-length documentaries and animation projects with a minimum duration of 70 minutes will be accepted. Series, news reports or TV films will not be accepted.

VII. The projects that are submitted must be in an advanced stage of development, in other words must preferably have secured financing of at least 20% of production costs. Projects in the shooting or post-production phase will not be accepted.

VIII. The projects that are submitted will be registered online at no cost, by means of the Registration Form that will be available as of the 26th of Septiembre at the website www.mafiz.es (https://mafiz.es/es/evento/maff/formulario).

IX. Projects that were submitted at the previous edition cannot be registered again in this call for applications for MAFF 2023.

X. The material/information must be sent in the official languages of MAFF, namely Spanish and Portuguese. Forms may be presented in both languages.
In case participants have a version of the script or treatment in English, please attach it to the application in order to facilitate the evaluators’ work.

XII. The material/information sent by the applicants will be kept confidentially by the Malaga Film Festival and associated entities connected to the Festival, and by the members of the assessment team and the selection and benefit professionals.

XIII. The projects will be selected by four experts with a renowned professional career.  The decision of the jury committee cannot be appealed. The organization reserves the right to announce the assessments publicly.

XIV. Once the projects have been selected by the Jury Committee, producers will be formally notified, and must confirm their assistance. Subsequently, an official public announcement will be made on the website www.festivaldemalaga.com and the social media associated to the Malaga Film Festival.

XVI. Once the project’s participation has been confirmed, the Producer undertakes to send the material/information that is requested in two languages, namely Spanish and  English, within the deadlines established by the Malaga Film Festival.

XVII. The Malaga Film Festival will have the right to use the material/information of the selected projects for their dissemination and promotion in national and international territories through the communication channels or media it deems appropriate.

XVIII. MAFF is an international event, attended by European producers to learn about the projects selected. Therefore, it is important that pitchings and presentations be done in English.

XIX. In case a project is selected:

- The project’s director/producer undertakes to attend the full two days of the MAFF event. In the event they do not participate, the project will be disqualified.

The directors and/or producers of the projects selected at MAFF must include the MAFF - FESTIVAL DE MÁLAGA logo in the film’s opening and closing credits, with the following text: “Official selection MAFF – 2023”. The logo must also be included in all film advertising, press material and its website. In addition, the logo of the collaborating company awarding the prize must also be included in the film credits. The first logo will be provided by the Malaga Film Festival, and the second one by the collaborating company.

• BOLIVIA LAB
Bolivia Lab Industria Prize to participate in the production laboratory to be held in July 2023 in the city of Santa Cruz, Bolivia..

• SANFIC, Santiago International Film Festival
Industry SANFIC prize to participate in the production laboratory to be held in August 2023 in the city of Santiago de Chile.

• ACORDE / MUSIC LIBRARY
3 prizes will be awarded to 3 MAFF projects (Prize for a Latin American project, Prize for an Ibero-American project, and Prize for a project in the Women Screen Industry Section), consisting of a cash prize of €300, as well as a flat production fee worth  €295.00.

• ECAM
ECAM Prize to participate in a development program attached to La Incubadora, to be held in the autumn of 2023 at the said Madrid Film School.

XXI. On the veracity of the information
In case the person in charge of the projects has not provided true information regarding the project’s financial situation or his/her competencies, in the documents submitted with the application or during the execution of the project, and if no corrections are made to the organizers’ satisfaction pursuant to their comments regarding this matter, the Malaga Film Festival reserves the right to inform the competent authorities of said  person’s country of origin regarding the matter and any action deemed appropriate by the latter. Moreover, the production company will be barred from submitting projects for a period of five years. The decisions adopted by the Malaga Film Festival in this respect shall be recorded in an administrative act that will be sent to the affected person by registered mail, giving rise to the obligation to refund the amounts he/she may have received as a prize in cash or in kind.